I'm sure we've all been asked some version of this question before: If you were stranded on a desert island and could only bring one _____, what would it be?

As a vegan cook and general fan of eating my mind goes to food first. Sure, it's nice to have books and stuff for entertainment, but... food. Yeah. Anyway, I found myself contemplating a real-life version of this question a couple of years ago when I was planning to go work in Korea (which didn't end up happening, but that's another story for another day).

Fun fact: Korean food can be totally awesome. A mouthwatering combination of salty and sweet, lots of spice, and tons of veggies like zucchini and mushrooms and leaves and other shit I like. Not-so-fun fact: A lot of Korean dishes have fish juice in them. Or bits of meat. Or both. That's not to say that one can't find vegan food or "accidentally vegan" snacks in Korea, but it's a little harder than it is here in America. Oh, and the fact that I'm not fluent in Korean doesn't really help when reading labels. So I figured I'd probably do a lot of cooking at home, and had a marathon "Is ______ easy to find in Korea?" Google session to prepare.

Even-less-fun fact: A lot of ingredients that I purchase regularly and love are uncommon there. Yes, it is possible to get American and Mexican-style spices there, but where is my giant wall of different brands of them?! Or my multitude of TVP granule textures? I'm certain that I would have adapted to what was available locally and not starved to death, but it got me thinking about what few things I would stockpile in my luggage or pay the big bucks to ship from overseas. So without further ado, here's my list!

Ahh, good old nooch. These little yellow fishfood-type flakes smell like buttsweat and turn your pee electric yellow, but I'll be damned if they aren't the finest thickeners for sauce that money can buy. In case you're new to veganism, let me briefly explain: Nutritional yeast is a non-active yeast and is "nutritional" because it contains a shitload of B vitamins (which is why it turns your pee yellow). It lends a vaguely "cheesy" taste to dishes, making it popular for vegan gravies, mac-n-"cheez" dishes and so on. Personally, I also love it sprinkled on top of pasta and popcorn like one would sprinkle Parmesan cheese. The various brands do taste a little bit different to each other, and my personal favorite is Kal. Lately I've had trouble finding it though, so I've just been getting it from the bulk bins at Whole Foods or buying whatever's cheapest on iHerb. 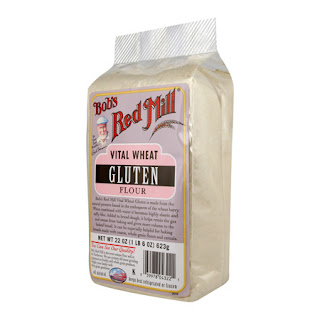 This ultra-gluteny flour is used for making seitan, aka "wheat meat". I need to tell you a secret... I have never made seitan all the way from scratch. When I say "all the way from scratch" I mean the thing where you start with regular flour and knead and rinse away until you're left with pure gluten globs. Vital wheat gluten can be a bit harder to find outside the USA, but it makes the seitan creation process SO EASY because you can just mix it into your recipe and give it a good knead without worrying about rinsing and rinsing (and rinsing and rinsing). When I lived overseas I got my VWG off iHerb, and now I buy it in a giant tin off Amazon since it's much cheaper that way.

If you're new to making seitan, don't be scared! It's actually quite easy with vital wheat gluten. If you've never made any sort of seitan-esque food before I recommend the famous "Seitan O Greatness" recipe - you can change up the spices to your liking and it's pretty foolproof since you bake it in the oven like a salty, proteiny cake. 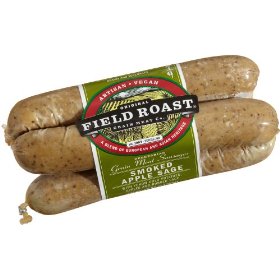 Speaking of wheat meat, have you tried Field Roast's Apple Sage sausages? Because they're fucking delicious. To be honest I'm not sure how easy these would be to take overseas, since they technically require refrigeration and do resemble real meat somewhat (which might get them confiscated by customs), but I'll be damned if I wouldn't try. A lot of "meat-like" products have these weird, spongy texture, but Field Roast sausages are chewy in the most delightful (and appetizing) way. I'm partial to the apple sage variety because I think they're the most versatile, but they also come in "Italian" and "Chipotle". Now I'm drooling just thinking about this. Check out Field Roast's website for info on where to buy them. 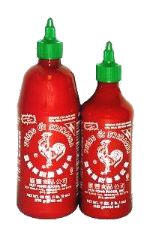 That's right, it's the ubiquitous "cock sauce". Yes, I know that one can find hot sauce all over the world, buy Huy Fong's Sriracha is super-versatile and an American classic. The best way to descibe it is as spicy, garlicky ketchup. You can put it on and in everything. Well, maybe not ice cream. Well, maybe ice cream if you're feeling daring.

Did you know that traditional Thai sriracha (and other Western brands) sometimes contains fish sauce? Huy Fong sriracha is veggie-friendly, so if you're buying something else read the ingredients carefully!

One can find this stuff in most large American supermarkets these days, but if you're overseas or rural and jealous you can buy it at iHerb. 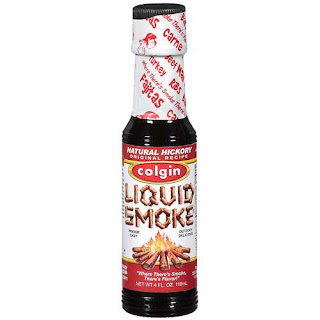 This is one of those little things that's super-common here but stupidly hard to shop for overseas. Personally I'm fond of the "hickory smoked" variety. Colgin (the brand pictured above) usually goes for about $2 per bottle in supermarkets, but since it's a liquid it can be quite expensive to ship across the globe. :/

In case you have no idea what this stuff is for, it's basically a liquid seasoning that adds a "smoky" flavor to dishes. It's great for things like chili, barbecue sauce marinades etc. A little goes a long way, so unless you eat barbecue sauce with every meal then one of those little bottles will last a fairly long time. Right now I'm not sure where one can buy this outside the US, so if you know please tell me in the comments! And if you're in the US and having trouble finding it locally, you can buy it at jacked-up prices off Amazon. 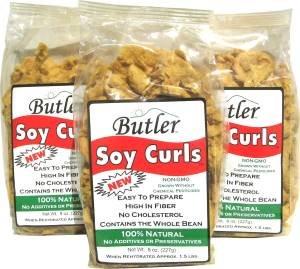 Soy Curls are, as the name might suggest, little pieces of soy protein shaped like curly strips. It's a dry product, so you prepare them by soaking the curls in warm broth until rehydrated, squeeze out the extra liquid, then cook in a skillet or whatever until they're done. These are fabulous for stir-fries, tacos and other things where little strips of "meat" might be appropriate.

I feel like it's important to point out that Soy Curls are not the same as other TVP. I don't know if it's the texture or what, but they are just like... better. Now, regular TVP granules and chunks certainly have their time and place in my kitchen (I'm talking about stews and chilis) but these are just so much better in non-liquidy dishes. That's my opinion, anyway.

I have had no luck finding these locally where I live, so I've bought them off Spencer's Market, FakeMeats.com and direct from the Butler Foods website. I have no idea where one could obtain these overseas, so if you know tell me in the comments! 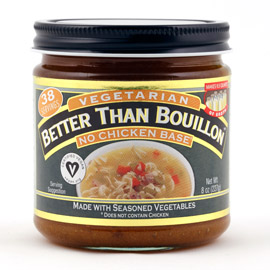 Since you're now probably (maybe) think about what to soak your Soy Curls in, might I suggest Better Than Bouillon veggie bases? They're like bouillon but... better. I also use this stuff as a base in soup, because I'm too lazy to make my own broth, and this stuff is cheaper than buying cartons of veggie broth. Oh, and it really is better than cubes or granules. My personal favorites are the "No Chicken" and "Vegetable" varieties, though one should be warned that the "No Chicken" base looks almost exactly like the "Chicken" base sold by the same brand so read the label carefully.

Since I've mentioned chili about a hundred times in this blog post, I think it stands to reason that I would bring chili powder. Chili powder is extremely cheap and easy to find in the USA, but that's not the case everywhere. Also, when I say "chili powder" I mean a blend of spices intended for chili (duh) and other Tex-Mex type food... blends typically include some sort of dried chilis, cumin, garlic etc. I've seen pure cayenne powder labelled as "chili powder" in some non-American shops, and it is NOT THE SAME THING! So just keep that in mind the next time you wonder why your chili beans are so ridiculously spicy. My personal favorite all-purpose chili powder of the moment is Penzey's Medium-Hot, But if you're overseas and desperate then you can get Frontier or Simply Organic brand chili powder from iHerb. 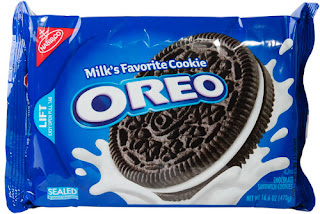 Something touted as "milk's favorite cookie" doesn't exactly sound vegan-friendly, but surprisingly these are dairy-free. Well, the ones in the USA are - sorry Europe. (Correction: Apparently Europe's Oreos are now dairy-free too? Rejoice!) I imagine one could find some "accidentally vegan" sweets in nearly every country, but I would "Doublestuf" a package of these in my suitcase to tide me over until I figure out what that is at my destination. 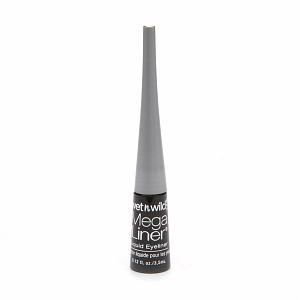 Yeah, OK, I know this is not a food. But I want to feel pretty while I eat my nutritional yeast out of the jar with a spoon, damnit. Anyway, Wet 'n' Wild is not a 100% vegan company, but they don't animal test and they clearly list in their FAQ which of their products are vegan. Have I mentioned that their stuff is cheap? Because it's really, really cheap. Wet 'n' Wild's Megaliner is surprisingly not crappy, and that combined with the fact that it's only $3 means I've been using it for years, possibly even since I was a teenager when my mother was chasing me around with a baby wipe trying to get my makeup off.

Please note that the formula for their waterproof liner kind of sucks, so I'm only recommending the regular one. I don't know where one can get this overseas, so if you know tell me in the comments!

What vegan items would you bring with you if you were headed to a desert island (or just overseas)?
Posted by Admin at 8:02 PM